Active Merthyr ran a Primary School Cricket Festival on July 11th @ Hoovers Cricket Club. The festival was run in partnership with Merthyr Cricket Club. On the day there were over 100 children partaking in cricket, some of them of which was the first time they had ever played cricket. The children took part in some group stage fixtures in the morning and the afternoon was for the Semi Finals and Final, with some consultation games going on for the teams that didn't qualify for the finals.

For the final all the children sat around the pitch to watch Ysgol Y Graig and Pant battle it out to become the winners of the Active Merthyr Primary School Cricket Festival. Pant won the toss and decided they would like to field first and asked their opposition to bat first. Ysgol Y Graig scored a tremendous 238 from their 8 overs. In return Pant fell 22 runs short and scored a respectable 216, meaning the winners were Ysgol Y Graig.

A massive congratulations to Ysgol Y Graig and all the other children who attended the day, it was great to see how their skills improved as the day went on. Councillor Geraint Thomas was in attendance to produce Ysgol Y Graig with the winners medals and trophy. He said to the children how cricket is "the best sport in the world" and how it was "great to see so many children enjoying themselves and playing cricket".

If you would like to take part in cricket then Merthyr Cricket Club are in our activity club finder, head over to find out information on the club and how you can join in. 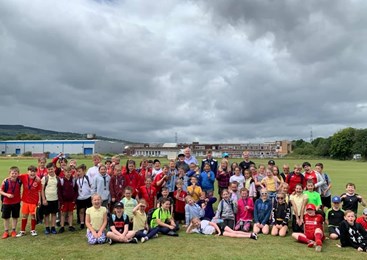 Council consults on strategy to make people healthier and happier